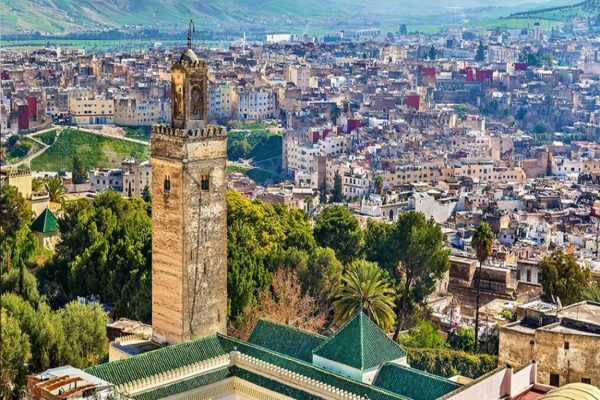 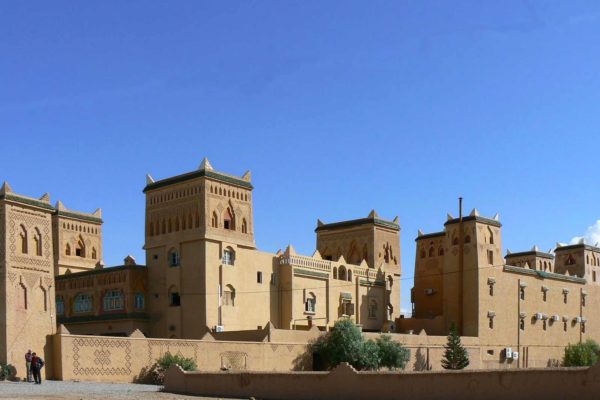 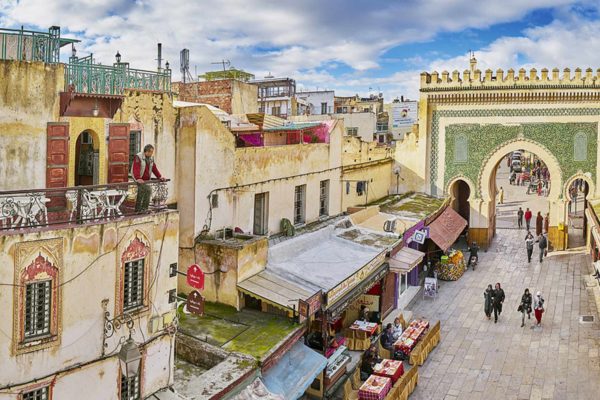 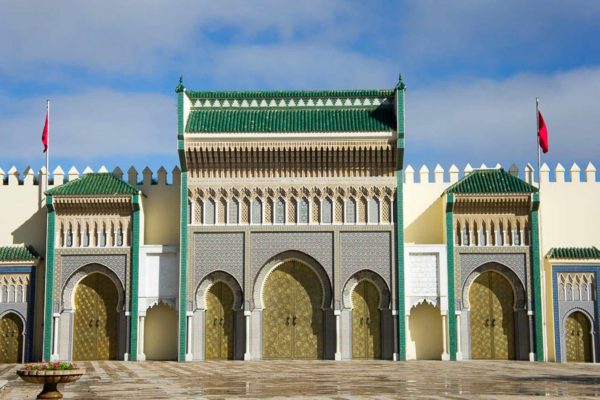 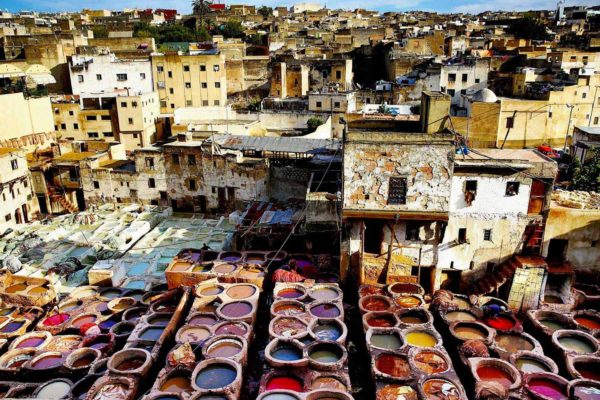 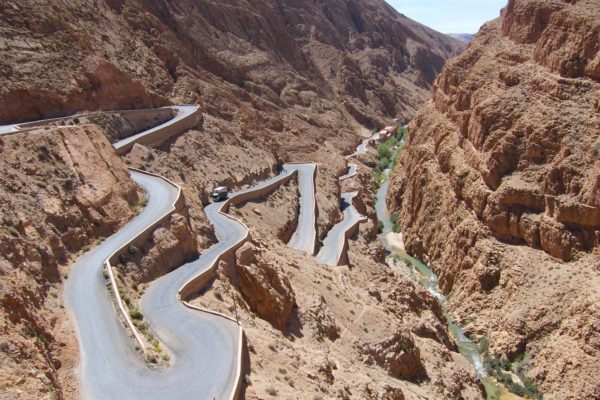 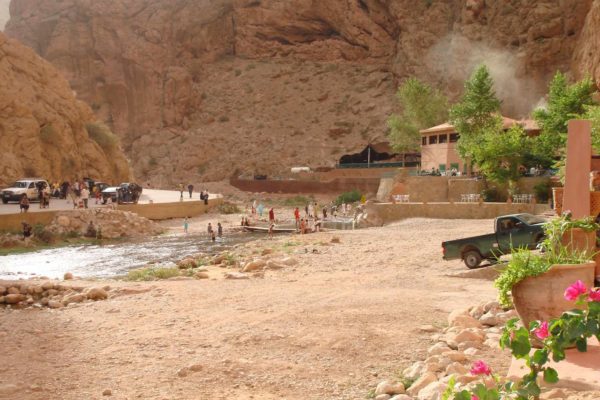 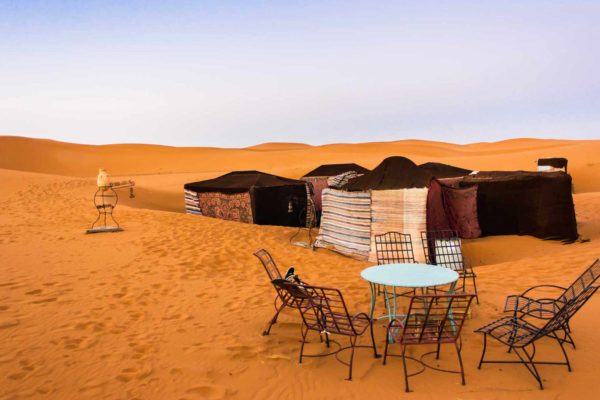 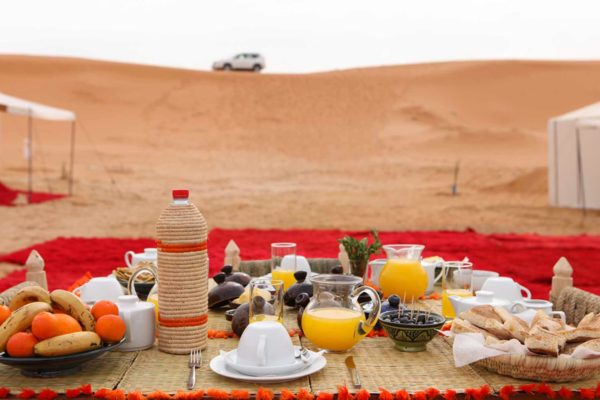 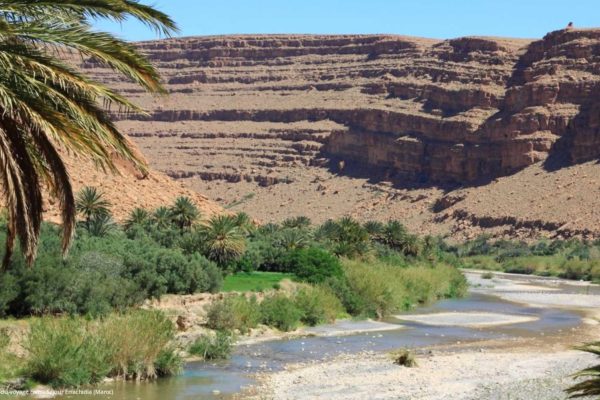 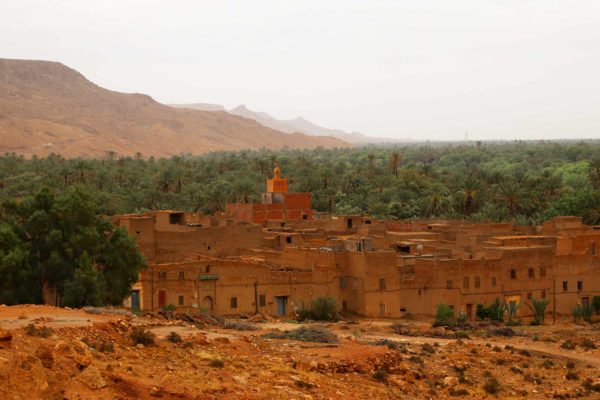 Leave Fes towards Erfoud, the small town on the edge of the Sahara desert. En-route, stop at Ifrane which has Alpine air. Continue to the pleasant market town of Midelt, which lies at the foot of Mount Ayachi and is renowned for its fine Berber carpets. The latter part of the journey sees the road descend across the Atlas Mountains and down into the palm-filled Ziz Valley. The scenery is stunning, as are the views over endless palm plantations and fortified Berber villages before reaching Erfoud. Switch the vehicle to 4*4 and enjoy an off-road tour, as we set out on a sunset excursion to the breathtakingly beautiful sand dunes at Merzouga on the edge of the Sahara erg, In the enormous silence we watch the sunset over the desert and enjoy a camel ride along Morocco’s only Saharan dunes where we will spend the night in a Bedouin camp.

Depart Erfoud this morning bound for Ouarzazate.  Our first stop is in Tineghir, a stunning mountain oasis rising on a series of lush riverside produce gardens accented by palm trees and dominated by ornate clay villages.  Here we visit 984-foot Todra Gorge, home to a variety of rare plant and bird species.  Lunch at leisure, then begin our journey along the “Route of a Thousand Kasbahs,” a region of fortresses with elaborately decorated façades. Visit the Berber caves in Dades. We continue on through “Valley of the Roses” and El Kelaa M’gouna, Morocco’s “rose capital,” before arriving at Ouarzazate late this afternoon.  Dinner tonight is at our hotel. (5 hours drive)

Early morning and around 08H00 leave Ouarzazate towards Zagora. With an English speaking and knowledgeable driver, you drive southeast to Agdez, where you stop to Mint tea and Moroccan pastries, then start a walking visit of Kasbah Tamnougalt which used to be the fortified village for both Berbers and Jewish. For film production, used by Brad Pitt to film the movie « Babel ». Share a cup of mint tea and fresh dates with the locals before we continue our drive along the magnificent Draa river with its hundreds of thousands date palm trees, Kasbahs and fortified villages. You will be taken on an hour walk in the Palmeraie under the shade of lemon, almond, olive and palm trees watching the local taking care of their crops or herding their kettle. We arrive at the old Jewish quarter of Amezrou. Where Haratines, Berbers, and Arabs live together from the tradition they inherited from the Jews who all immigrated in the last century: Silver jewelry making. On the arrival at Zagora, the last main town before reaching the desert dunes, we will have lunch served at a traditional restaurant before we visit the sand dunes of Tinfou. A camel ride will be a must to experience the only transportation mean our ancestors had to travel from one point to another. Later in the afternoon, drive back to Ouarzazate for the overnight.

Discover Ouarzazate then continue to Ait Ben-Haddou, one of southern Morocco’s most recognizable villages since it is often used as a location for fashion and film shoots. A UNESCO World Heritage site, the village’s old section consists of deep red Kasbahs so tightly packed together they appear as a single building.  The fragility of the buildings and their state of conservation means that we may have to stop outside the city itself depending on conditions at this UNESCO site when we visit. Continue our drive on descending from the mountains, passing through typical villages whose stone houses have earthen roofs.  Late this afternoon we arrive in fabled Marrakech, an ancient intersection of Berber, African, Mediterranean, and Asian cultural and artistic influences. Considered Morocco’s most cosmopolitan city. Marrakech boasts a spectacular location surrounded by rich farmlands and high mountains. (5 hours drive)

Start the guided tour of the second imperial city and its rich monuments such as the Koutoubia minaret, a symbol for the city since 800 years, the Bahia palace with its lovely courtyards and late Moorish architecture, the Saadian tombs with the sumptuous royal pavilion. In the afternoon, you will be taken to visit the “Hidden sides of Marrakech” where you discover the oldest building in the city dating back to the 12th century as well as the artisan quarters and the colorful Souks to interact with the real life of Marrakech. Before sunset you will be strolling in the square of which the city is so famed: Jemaa El Fna where hundreds of locals and tourists come to spend the end of the day watching jugglers, dancers, fortune tellers, storytellers, and traditional musicians.

After breakfast, transfer to the Airport for your flight back home (End of our service)

Be the first to review “THE MOROCCO HIGHLIGHTS” Cancel reply