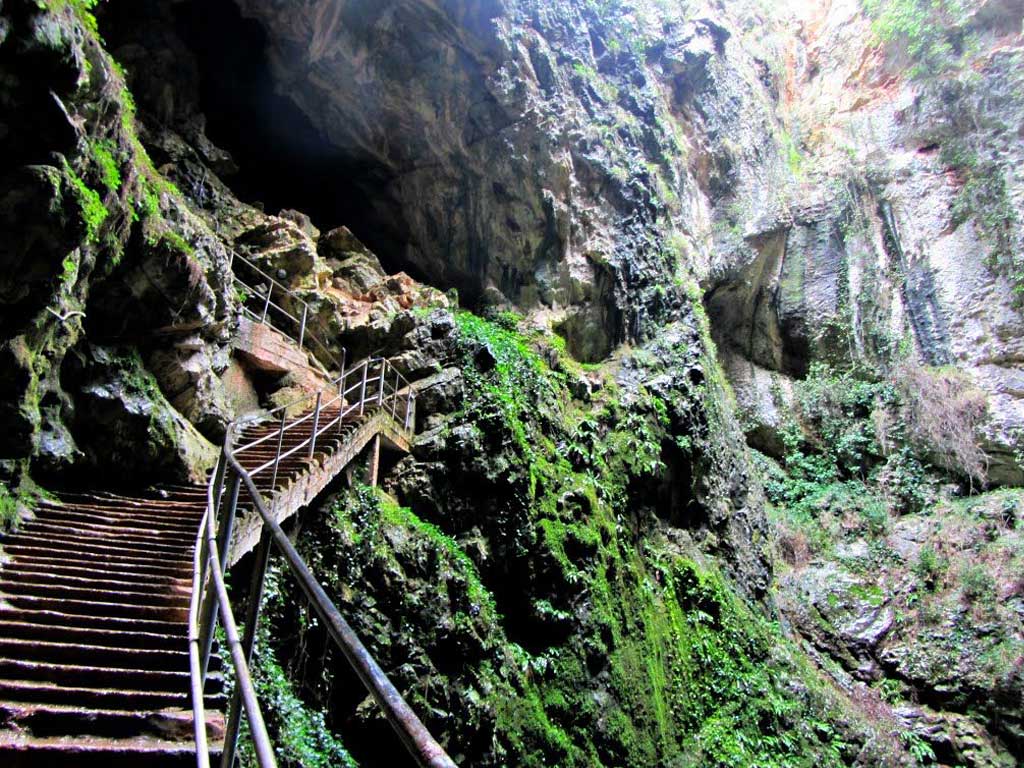 The product is already in the wishlist! Browse Wishlist

Located about 20 kilometers from the city of Taza ; it is considered one of the deepest caves in the world , more than 3.5 kilometers underground . It is an attraction for cave specialists , adventurers and visitors. Admire a staircase of 702 steps leading down to an underground palace. The galleries seem haunted by strange figures, they are stalactites and stalagmites.

After we explored Taza and had a quick lunch, we made our way to the Friouato Caves, roughly 15 miles south-west of Taza. As we climbed higher into the Middle Atlas Mountains, past the waterfalls and locals selling freshly cut heart of palm, olive and almond groves were replaced with cedar, pine and oak trees. It bears repeating: the views are outstanding! In the higher elevation, the rain we had had in Fes manifested here as a heavy snowfall, and we continued slowly and carefully on the snow-covered roads.

Located within the Tazekka National Park, the Friouato Caves are more commonly known in French as “Gouffre de Friouato” or “Grotte de Friouato.” I had always thought that “Friouato” was a strange choice of name for the underground cave system just outside of Taza. I assumed it was after some Italian spelunker who had discovered them, but I was delighted to learn there were two popular versions, and both of them romantic. The first is a Moroccan twist on Romeo and Juliet: “Fri” (the Moroccan Romeo) was in love with “Wato” (the Moroccan Juliet). They were madly in love with each other, however, the two families were against the union. One day the couple disappeared, only to be found later at the base of the main mouth of the cave, having apparently plunged to their deaths, forever united in love. The second version, with Berber origins, has an unfortunate ending as well. “Ifri” in this case means “cave” in the local Berber Tamazight language, and “Itto” is a popular girl’s name. It was therefore named in memory of this poor love-struck girl, who threw herself in the deep cavern after being forced to live far from her loved-one

HIGHLIGHTS OF THE EXCURSION

Be the first to review “TAZA CAVE FRIOUATO” Cancel reply